Some of the inhibiting factors for conducting a civil conversation in today’s United States – the influence of social media, polarization and the culture of cancellation – are the very ones that could prevent students from attending a conference on the needs of our nation’s great democratic experiment.

And yet nearly 100 students and adults, including local government leaders, showed up at Western Michigan University on Thursday, Oct. 5, to hear Aboo Patel, Interreligious America Founder and President, and Manu Meel, BridgeUnited States President and CEO, speak and answer questions about how to build a more diverse and just democracy.

“Re-Sitching the Fabric of our Democracy for the 21st Century”, a community conversation sponsored by We are talking about WMUdrew people into the ballroom at the Bernhard Center, including Kalamazoo City Mayor David Anderson and Kalamazoo Deputy Public Safety Chief Victor Green, who both asked questions illustrating concern sparked by the polarization of today’s society regarding the discourse and trust of public safety officers. 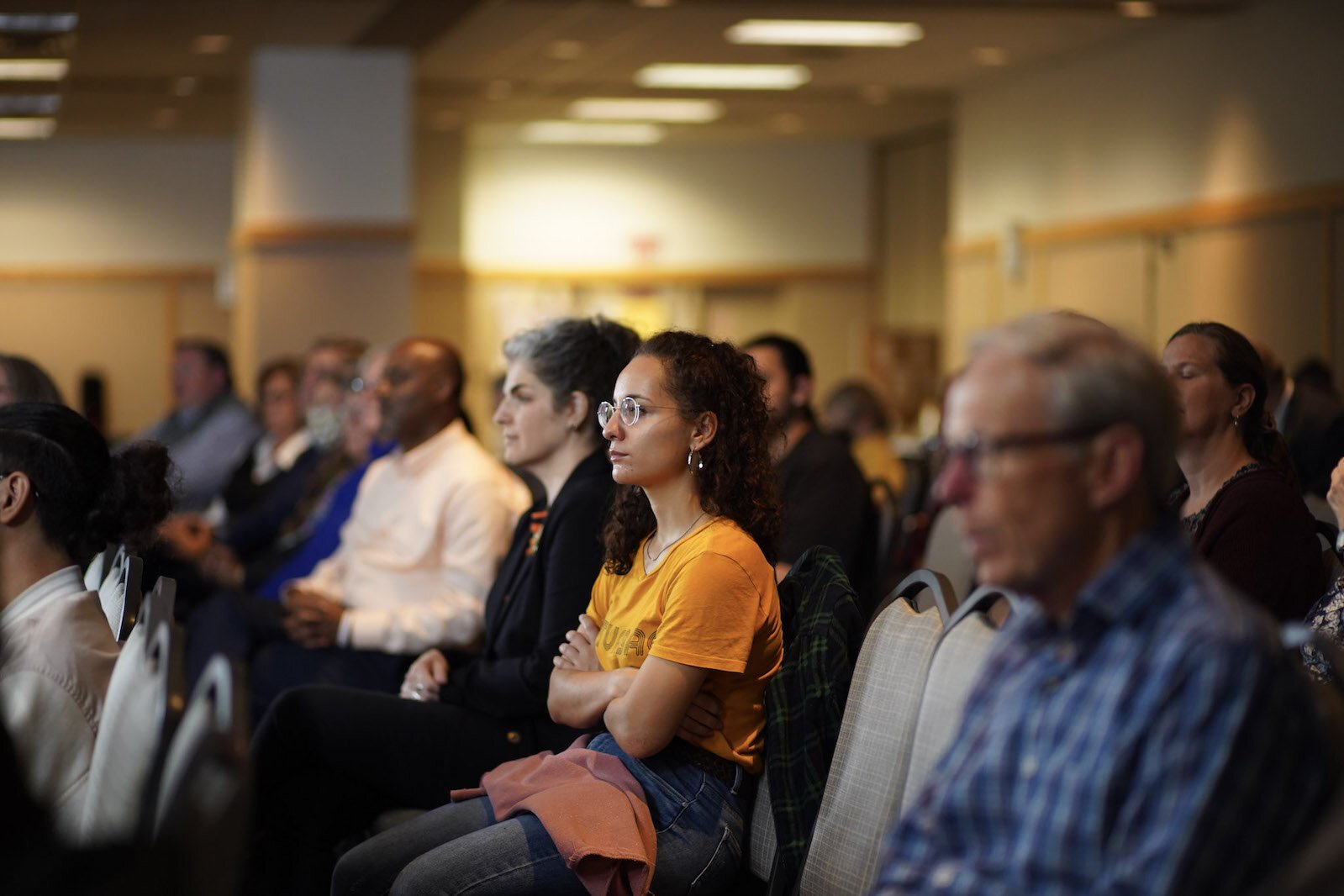 “Restoring the Fabric of Our Democracy,” WMU’s October We Talk attracted more than 100 community members and students.“A diverse democracy for centuries was considered impossible,” opened Patel, an inaugural member of former President Barack O’Bama’s Interfaith Council and author of a recently published book, We have to build.

As a democracy, the United States of America with its founding European diversity was the “great experiment”; ancient democracies, like in Greece, were formed by people of the same race, ethnicity, gender and religion, Patel said.

“The European founders came out of the feudal world by inventing the modern world. Did you expect them to do it right? ” He asked. “Yet all of these identity groups engaged in the genius of American civic (discourse) through common interests, such as education, health and recreation.” These common interests guided the cooperation, Patel said. 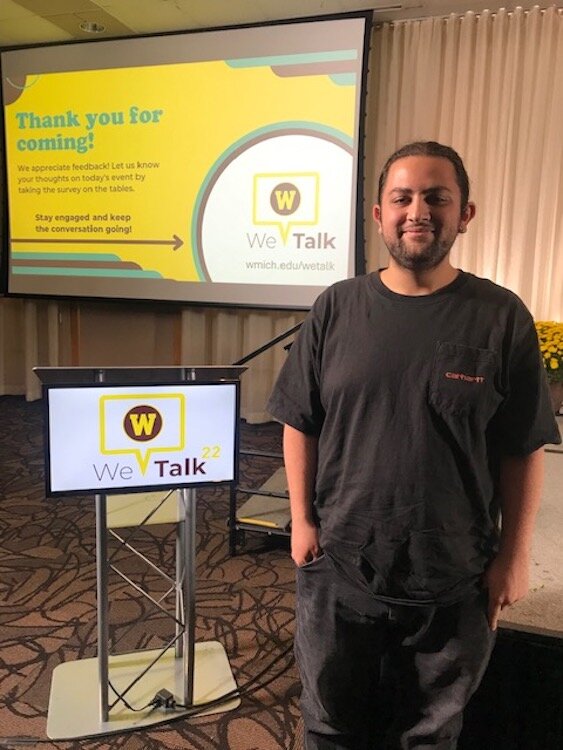 Jad Samman, the WMU senior, asked questions during the event.College campuses, as major civic institutions, are a powerful testing ground, Patel said. “We need to create a space on college campuses where people can deepen their own identities, relate positively to people of other identities, and cooperate with each other.” He praised WMU and the Fetzer Institute, a co-sponsor of We Talk, for realizing that the narrative around democracy needed to change.

So far, WMU, with its focus on programs, like those on We Talk, that promote increasing open inquiry, diversity of viewpoints, and constructive disagreement, is moving in the right direction.

In fact, WMU recently ranked 21st among colleges and universities nationwide for promoting and supporting free speech, WMU President Dr. Edward Montgomery shared with the audience in his comments. of introduction.

“We’re trying to build on that as we move forward,” Montgomery said. “We can refuse to let our differences divide us. They are real. Continue to be who you authentically are, but don’t let that divide us. Push and stretch to move forward. That’s what makes Western special. This is what it takes to make our democracy real. 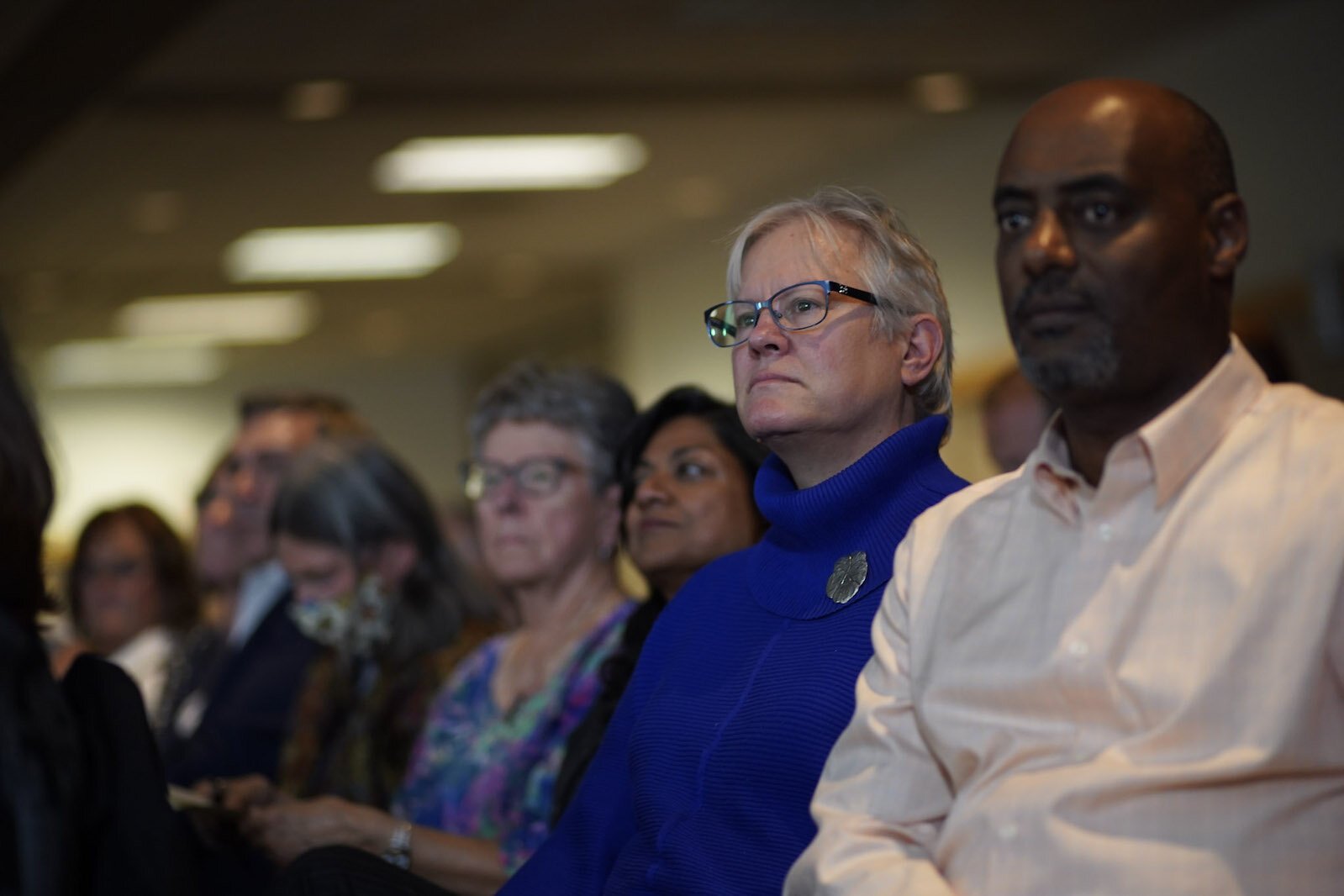 During the open-ended question period at October’s We Talk event, members of the public asked questions about trust and the police, young people and distrust of establishments, and the polarization of discourse around community issues.
Mentor and mentee

Meel, a Patel mentee, became aware of the need for civility in democracy during his college years at the University of California, Berkeley, particularly when violent protests took place ahead of a scheduled appearance by Milo Yiannopoulos, a British alt-right political commentator, in 2017. Meel, recently named one of Forbes’ most influential 30-under-30s, said he represented the “student perspective”.

“Young people are reporting record levels of apathy and disenchantment with the structure of democracy itself,” Meel said. “We are living the most ambitious democratic experiment in the history of humanity. We are not only heirs, we lead the democratic experiment. So why are so many students resisting this work?

Meel mentioned that he, like Patel, feared that Americans had let the voice of social media be too loud. He says the noise from the internet has clouded our perception of each other.

“Anxiety over someone who looks different from you is a human thing, something we have to overcome,” but Meel said he fears we’ve “built this culture where the response to someone’s anxiety about change is punitive, not open”.

A road trip he took across America engaging people in conversations about democracy and their values ​​showed Meel that people want similar things. “When you bring out the human in the conversation, it’s profound. Twitter isn’t a real space. Society is. We can’t let our perceptions of social media cloud the way we see people.

In response to a question about changing democratic metaphors posed by the moderator, Dr Lauren Foley, professor of political science at WMU, Patel said that the “melting pot” metaphor where differences are ignored in favor of homogeneity no longer applies in America. He prefers the “potluck” metaphor.

“What is a potluck? You assume everyone is a contributor,” Patel said. “Do you want a cohesive group of people to come to your potluck? You want a variety of people to come see how the dishes go together. That’s the beauty of a potluck. There are a million ways it can go wrong and it almost never happens. Things usually happen where people are invited to bring their best dish and see how it cooperates with other people’s dishes.

Building trust between the police and the public

Kalamazoo Deputy Public Safety Chief Green was the first to ask a question when the floor was opened. “How do we get the community and the police together so it’s not us against them?” ” He asked. “The root of the problem is fear. What would you suggest to enter into this fear in order to dialogue, to access this safe space?” 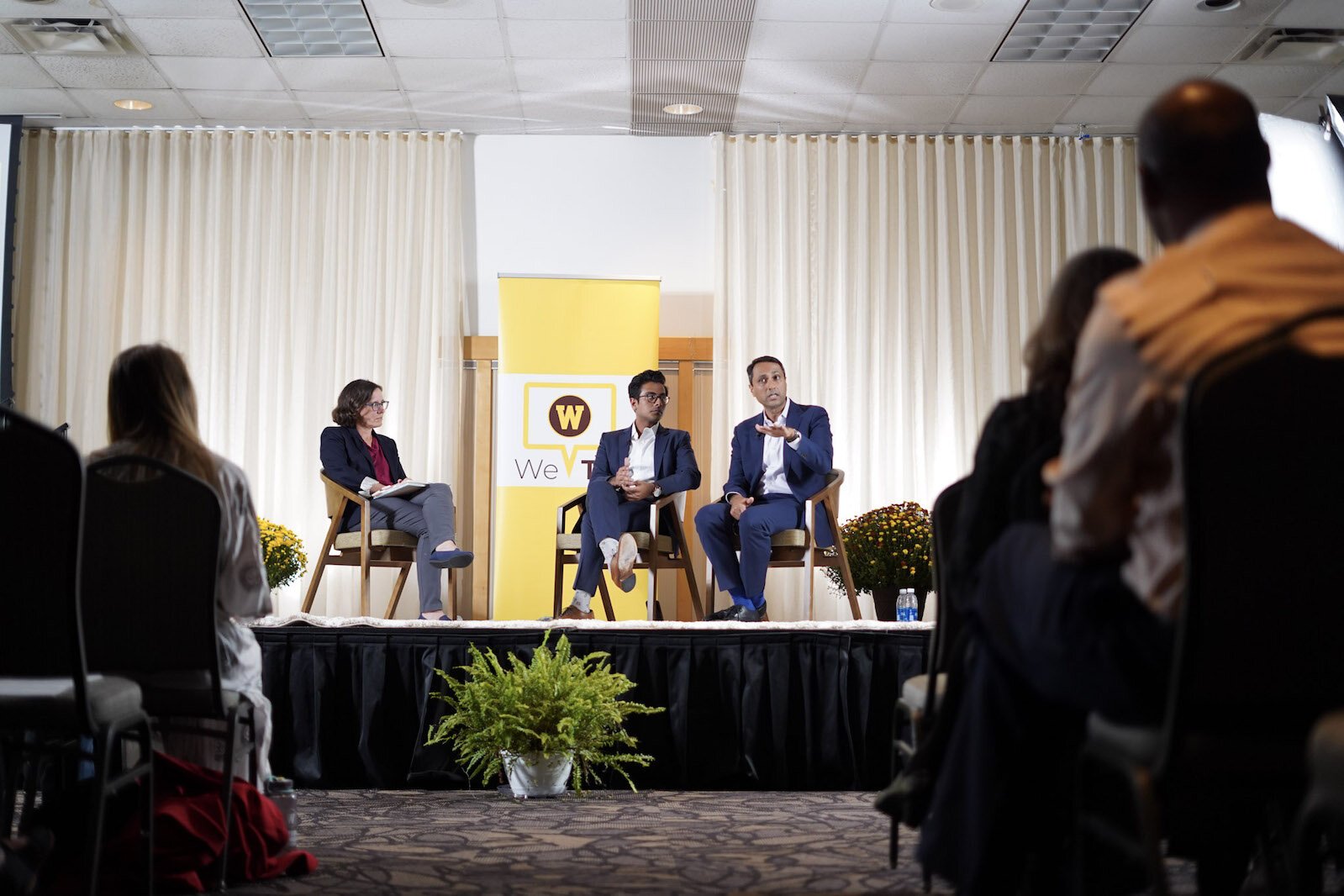 Eboo Patel and Manu Meel visited Western Michigan University for their We Talk lecture series.After praising Green for his question and his presence at the conference, Patel suggested starting to create an environment around a common goal, which is public safety. “There are a variety of institutions that contribute to public safety — families, schools, police. How can we do this in as cooperative a way as possible?

“Put that common goal on the table with shared responsibility,” Patel suggested. “A lot of people are in charge and have different roles. The police have a really important role. Work to elevate shared hope and make it as motivating and inspiring as shared fear would be. If you don’t bring your own, we don’t have potlucks.

Meel put forward the idea that in response to America’s overwhelming appetite for social media, even at the point of saturation, an information pyramid should be created for an information regime, much like the guide daily food choices that the United States Department of Agriculture created in response. to the increasing availability of “junk food”.

Social media use is a concern for Jad Samman, a communications specialist from Troy, Michigan, who attended Thursday’s conference. Samman said that, like many of his peers, he finds himself “deep in social media” and “terminated online”.

“I spent a lot of energy trying to balance it out and ban it for sanity. So when I heard that part of the speech, I saw that 100% social media is an echo chamber that limits dialogue and polarizes. We are all tracked by algorithms. I don’t see the latest news. I’m confined to my own bubble which includes people around me and things I love.

But he admitted to some skepticism about comments about cancel culture. “I kinda feel like I’m rolling my eyes when people complain about the cancel culture,” he said. “I look at people in higher positions of power and they can be temporarily canceled, but I don’t see them twisted or fired. You must be in a lower hierarchical position to be canceled.

Samman said the conversation made him think more deeply about both his use of social media and his political reactions. “In the spirit of the speech, I think instead of reacting from a place of rage, I need to stop and pause, bend and stretch my own political thoughts and think about them more clearly.”

And though Samman admitted he was lured by his teacher’s promise of extra credit, he was glad he came.

“By coming to events like this, I’m doing something to disrupt the monotony and diversify the pool of news and information I’m already consuming, and that helps burst that bubble.”

WMU’s We Talk was founded in February 2020. Its goal is to “bridge the emotional gap between conflicting beliefs through intentional listening, rational actions, rational language use, and empathy.” Sponsored by Stephanie and Ed Fletcher, the Fetzer Institute and the heterodox academy, We Talk offers free speech cafes, informal panel discussions on free speech rights and responsibilities, and hosts multiple speakers throughout the year.